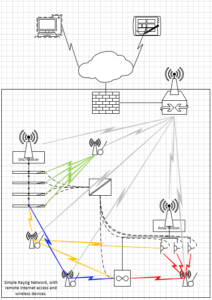 The original project was instigated in May 2011 when a request for help to develop some software for Atmel micro-processors was responded to. The idea of the project was to utilise an existing hardware design and the Zigbee protocol to provide a mechanism to communicate with each module and provide input / output and energy usage reporting.

In October 2011 the basic principles were demonstrated. A Zigbee network co-ordinator provided a mechanism for modules to join a network, one device (modified from the original idea) was used to control an output module to turn power on / off.

A number of changes from the original idea had to be made, and when the instigator of the project decided to move in a different direction, IPR was recognised as being with the Rayzig project.

The project took a major step in July 2013 when Atmel’s Lighweight Mesh stack was used to replace the Bitcloud Pro Zigbee stack. This provided a more appropriate basis for development of the control software, and resolved a number of issues that had arisen.

The  early parts of 2014 saw small scale production achieved, with boards being manufactured in the UK and China. The result, demonstration systems could be made available to potential customers to trial the system.

Different module types, Input and output, include : Relay Output, 0 – 10v dimmer, 4 channel DALI master, 16 pair and 4 pair input, Gateway, WireBridge and IPBridge modules. (New modules are being considered as a need is seen – these currently include a single Relay output board, and a single channel Triac board – these are being designed for inclusion within standard strip luminaires).

The Relay module provides 4 separately controlled relays with a module (This was initially developed in 2011, with a commercially produced version in 2012). The Relays can be configured to have independent schedules, on/off defaults, and home/away functions. Version 2 of this board (produced in 2016) has moved to encapsulated power supplies, and pluggable connectors to ease wiring requirements.

2015 saw the development of the 0-10v output module to control luminaries with a 0 – 10v ballast. Where there is a need to instigate a power off with 1 – 10v ballasts, a Rayzig Output Relay module is used in conjunction with the dimmer module. The control aspects of dealing with this have resulted in additional functionality to the Raymon / Rayzig commands, giving level controls. The 0-10v module can be used for other types of control, being used to provide ‘set point’ control to other devices and controllers.

Again in 2015, a DALI (Digital Addressable Lighting Interface) Master Module was developed, thereby providing a mechanism to work with this luminaire technology. Up to 64 luminaires can be configured and controlled from each Rayzig Dali Master module. These are assigned to 4 channels, and each channel can be setup with themes to produce assigned moods.

2016 was spent looking into European funding, but with the advent of Brexit and a change for the company being worked with, this was not progressed, however, it give direction to a number of aspects of the project which resulted in further enhancements. These included: event monitoring system within output modules to record events and can be used for management purposes; a WebServer interface to allow access to the system; multi-occupancy control to allow a single system to be used for multiple, independent, users – such as a University Halls of Residence, or a multi-occupance building; a WireBridge to allow extension of the network over larger sites.

The Raymon PC software allows a system encompassing multi-site control for large companies.The software has been developed with many features to allow easy User configuration and control.

Whilst an energy module could provide individual usage data, it was decided that module usage could provide more appropriate information to show administrators where potential savings can be made. Each output module now records various events which can be collated centrally to show system wide usage.

Much of 2018 and 2019 was spent undertaking tests to show compliance with various European Standards so that a declaration of conformity could be issued for each of the modules. The products are now produced with the CE mark proudly shown.

Whilst testing was undertaken, some modules were refined, and others have been developed. These include an IP bridge to allow use of an IP Tunnel over a standard network / internet.

The system software has been extended to allow upto 6 subnets from the main Rayzig Network whilst retaining a conherent single network. Other extensions have seen the Multi-site / Utility functions reviewed and developed further.

For many, 2020 will be remembered for the Covid-19 outbreak, and we refrained from taking the product out to ensure that no exposure to staff occurred. However, we didn’t sit back, but took the opportunity of developing some variants of the existing boards – with a single relay board – which could be used within a luminaire, as well as a Triac based, single channel board. The former is a stripped version of the existing 4 port relay module, whereas the Triac Board is totally new and will require testing prior to availability.

2020 also saw some further developments in the Raymon and Rayweb software. Battery modules had always reported back to the Gateway their voltage levels, so that in the event of it going below a defined level it could be reported, so that the battery is replaced expediently. This basic mechanism has been adapted so that all modules now “report in” on a regular basis, and in the event of a module failing to report more than once, an email is sent out to management to investigate the cause. Battery Level reporting has also been extended to report via email as well.

As we have moved into 2021 we have been carrying out soak testing on the products (not putting them in water, but rather leaving modules running for extended periods and seeing if we experience any issues that need to be resolved). We have seen a couple of things that are being addressed. The soak testing has shown that there may be extra LWMesh configuration work needed to achieve large scale Rayzig networks. This is being worked on, firstly by trying to force the problem by increasing the network size, and then trying possible solutions to solve the problem.